With Halloween just around the corner, i've been in a festive mood! This morning I made spooky pumpkin pancakes for breakfast and for dinner I made a trio of delicious bat wings! Have them while watching a movie, serve them at a Halloween party or just eat by yourself! I don't like to share anyway... 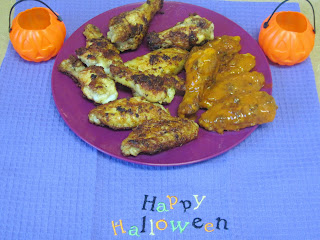 Combine all seasonings with parmesan and dredge chicken wings in it. Fry in a pan in 1 inch of oil on medium heat until golden brown and crispy.

Sprinkle the wings with salt and pepper to tate. Fry in a pan in 1 inch of oil until golden brown and crispy. Turning occasionally.
Mix the Franks, mustard, and Splenda in a separate bowl.
As soon as the wings come out of the pan add them to the sauce and toss to coat.

Out of the three versions, this one was my favorite. I couldn't put them down! I reccommend making a small quantity of the sauce and tossing a few wings in it  first to see if you like it. The ingredients sound kinda weird but I have to admit it was pretty good!


All of the seasonings, spices, and sauces can be doubled or tripled depending on how many wings you're gonna make.

All versions have only a trace of carbs per wing.
Posted by Adriana at 6:55 PM
Email ThisBlogThis!Share to TwitterShare to FacebookShare to Pinterest
Labels: appetizers, chicken, wings