Jalapeṅo Poppers are one of my favorite snacks/appetizers. A spicy pepper stuffed with gooey cheese and wrapped in bacon? What's not to love!

I usually cut them in half, stuff them, and wrap them that way, but today I had a different idea. Stuffing the pepper while it is still whole! I also did a combination half stuffed with cheddar, half stuffed with cream cheese! Mmmmmmmm! I just tasted one and it was very spicy just the way I like them and filled with gooey deliciousness! 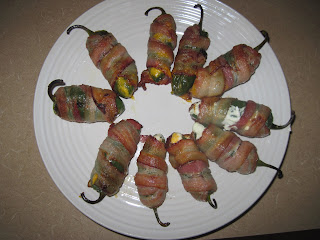 I like to parboil the peppers before I stuff them and wrap them because that makes the pepper softer then when you just wrap and bake. This step is optional, but it also helped the seeds of the peppers come out easier.

If you are going to parboil them fill a medium sized pot with water 3/4 of the way throw the peppers in and let them boil for about 10 minutes. *warning if your peppers are hot you will notice it while they're boiling cuz they'll smell hot!
After 10 minutes drain them and pat them dry. When they are cooled to the touch make a slit on the top from the stem to the end of the pepper. Please be careful when handling the seeds of the pepper. I recommend wearing gloves if possible. If you don't just be careful and whatever you do don't touch your eyes!
I used a 1/2 teaspoon from my measuring set to scoop the seeds out and it was perfect sized. Here's a picture of what the pepper will look like after the seeds are removed. 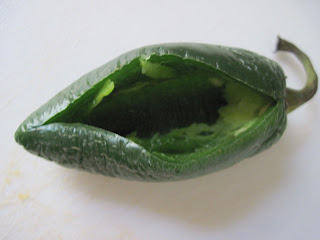 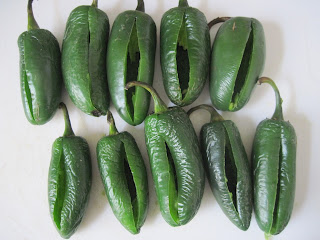 Take a bacon strip and wrap one around each pepper. They should look like this. 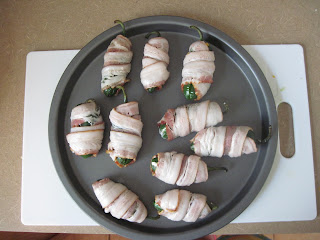 I broiled them in the oven on Low setting for 6 minutes on each side.  That's how my oven is it only has a high or low option. I placed them in the middle rack though because if you put them too close to the top they'll burn.
That's all it takes to make this delicious appetizer or snack! If you have leftovers don't worry they reheat well!
Here's a picture of the inside of the pepper Mmmmmmmmm! 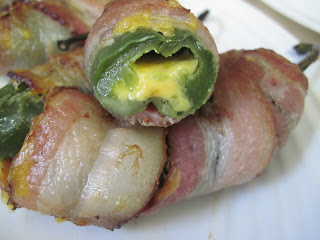